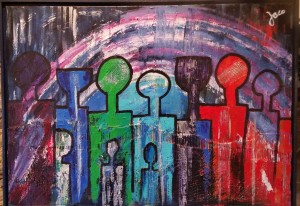 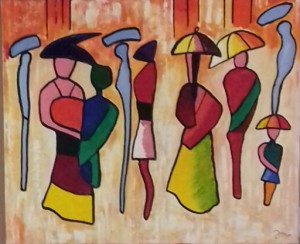 FREDDY JACOBS:
aka  “Jaco”  studied at the Royal Academy of Arts in Bruges, Belgium when he was young.

He became civil engineer and started to paint in 2009 when he became 50 years of age.
Jaco uses different materials in his paintings.
His passion is creating unusual and unique art using texture as a base for his works.
Jaco paints with feeling, using colour and forms to express himself. 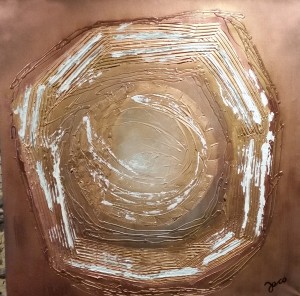 The variety of mixed materials are bringing structure and effects in his paintings.
Bright colours in an way that the paintings start to inter-act with the viewer, creating emotions and strong feelings.
Jaco’s  work is a bold mix of styles, ranging from sleek and contemporary to weathered and organic. With a subtle and sophisticated feel to his paintings through a unique balance of colour, composition and texture.
The coloured mixed media are having their own dialogue with the audience.
Jaco brings a variety of theme’s. As he gets inspired he always experiments to make some variations of the initial idea and series.
Constantly evolving and exploring new techniques which allows him to look at his work in a new light.
This creative process gives him energy and satisfaction, feelings that he transmits  through his works to his viewers…..

Royal Academy of Arts in Bruges, evening classes , till 1979