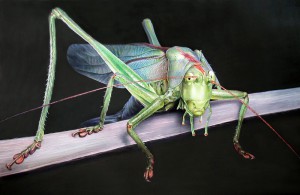 At a very young age, when I was barely old enough to see over the table, I discovered that my father, an architect in his professional life, spent all his free time drawing and painting watercolours. My first thought was, I want to do that too. My father recognised this as an opportunity and began teaching me the basic elements of drawing.

When I finished school, I didn’t go to art school. After a series of adventures, I began studying Dutch law at the University of Maastricht, a study I completed in 1991.

The course covered all aspects of medical illustration, including the study of human and animal anatomy. Although I worked my way through stacks of heavy anatomy books, I often found they lacked the information I needed. Dissection of prepared cadavers provided the all-important further information I needed to make an accurate representation.

After my graduation I got particularly inspired by insects and tribal cultures around the world. Both are losing their habitats to urbanization, with the result that their populations are quickly declining. I want to paint them on canvas, as large as possible, before they pass away.